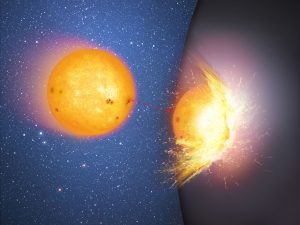 Planet Suran is a paradise and offers the best conditions for life. Its diverse inhabitants are intelligent - all of them. According to legend, the builders, higher beings, breathed intelligence into the creation shortly after the world was created. Science sees it differently: biologists have found evidence that all genetic material of suranic life has been artificially altered in the recent past.

Olom doesn't know who is right, traditionalists or moderns, and he doesn't care because he has his own problems. He has been lovingly raised by his three parents, but still he is missing something: a being just like him. No one else on Suran has only two legs and two arms. No one moves as clumsily. A strange photograph promises Olom help. But to uncover his origins, he must enter places that no Suran before him has ever explored. Are the builders themselves hiding there?