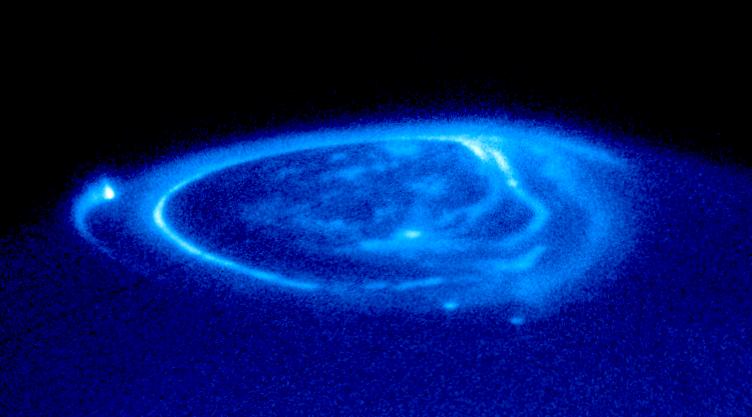 The Sun generates low-frequency radio waves in the Earth’s radiation belt. If you were to listen to them in a loudspeaker (which is actually what scientists were doing when these radio waves were discovered in the 1960s), they sound like the whistling and chirping of a flock of birds. These special waves were therefore given the name chorus waves. It was later discovered what these chorus waves produce: they are particularly well suited for transferring energy to electrons in the solar wind. Charged particles accelerated by them can then produce particularly good auroras when they enter the Earth’s atmosphere. Chorus waves are apparently closely related to the phenomenon of pulsating auroras in the form of flickering areas of the sky hundreds of kilometers long.

But chorus waves are not just on Earth. Any celestial object that has its own magnetic field could also be surrounded by chorus waves. In a recent article in Nature Communications an international research team describes extraordinary “chorus waves” around other planets of our Solar System. The team, led by Yuri Shprits from GFZ and the University of Potsdam, evaluated data from the Galileo probe and reports that the intensity of the chorus waves around Jupiter in the vicinity of the moon Ganymede are greater by a factor of a million than the average intensity of wave activity in this area and even a hundred times greater than the wave intensity in the vicinity of Jupiter’s moon Europa.
END_OF_DOCUMENT_TOKEN_TO_BE_REPLACED