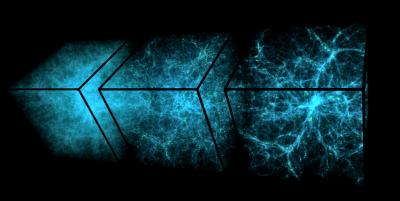 The idea that the expansion of the universe is accelerating is taken as fact today. The cause is a repulsive form of energy, dark energy. But its nature remains a mystery. Now, a team of researchers at the University of Hawai’i in Mānoa have made an interesting prediction in The Astrophysical Journal: dark energy, which is responsible for this accelerated growth, could originate from a giant sea of compact objects spread out in the cavities between galaxies.

Since the mid-1960s, physicists have known that the collapse of stars might not produce true black holes, but instead so-called “GEneric Objects of Dark Energy” (GEODEs). In contrast to black holes, GEODEs fit very well into Einstein’s equations, because they don’t contain singularities. Instead, a rotating layer surrounds a core made from dark energy. From the outside, GEODEs and black holes appear very, very similar. This also applies particularly when the “noise” of their collisions is measured with a gravitational wave detector.