Watch out for these books by Brandon Q. Morris: 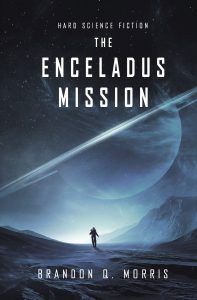 Description: In the year 2031, a robot probe detects traces of biological activity on Enceladus, one of Saturn’s moons. This sensational discovery shows that there is indeed evidence of extraterrestrial life. Fifteen years later, a hurriedly built spacecraft sets out on the long journey to the ringed planet and its moon.

The international crew is not just facing a difficult twenty-seven months: if the spacecraft manages to make it to Enceladus without incident it must use a drillship to penetrate the kilometer-thick sheet of ice that entombs the moon. If life does indeed exist on Enceladus, it could only be at the bottom of the salty, ice covered ocean, which formed billions of years ago.

However, shortly after takeoff disaster strikes the mission, and the chances of the crew making it to Enceladus, let alone back home, look grim.

From internationally best-selling hard science fiction author Brandon Q. Morris comes a new novel for hard science fiction enthusiasts. As a physicist and space specialist, Morris describes the journey of the international expedition through the hostile vacuum of space, using the latest scientific findings and technology trends as his inspiration. This isn’t a What If book, this is a When Will book.

Bonus: A Guided Tour of Enceladus – what science knows about the ice moon. 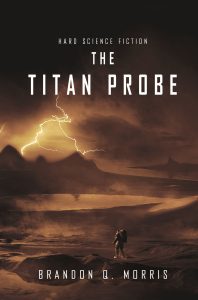 Description: In 2005, the robotic probe “Huygens” lands on Saturn’s moon Titan. 40 years later, a radio telescope receives signals from the far away moon that can only come from the long forgotten lander.

At the same time, an expedition returns from neighbouring moon Enceladus. The crew lands on Titan and finds a dangerous secret that risks their return to Earth. Meanwhile, on Enceladus a deathly race has started that nobody thought was possible. And its outcome can only be decided by the
astronauts that are stuck on Titan.

Bonus: A Guided Tour of Titan – what science knows about the Methane moon. 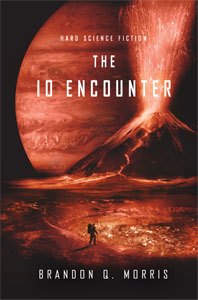 Description: Jupiter’s moon Io has an extremely hostile environment. There are hot lava streams, seas of boiling sulfur, and frequent volcanic eruptions straight from Dante’s Inferno, in addition to constant radiation bombardment and a surface temperature hovering at minus 180 degrees Celsius.

Is it really home to a great danger that threatens all of humanity? That’s what a surprise message from the life form discovered on Enceladus seems to indicate.

The crew of ILSE, the International Life Search Expedition, finally on their longed-for return to Earth, reluctantly chooses to accept a diversion to Io, only to discover that an enemy from within is about to destroy all their hopes of ever going home.

Bonus: A Guided Tour of Io – what science knows about the volcano moon. 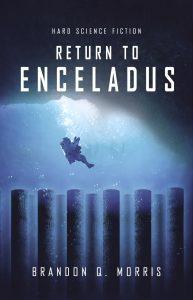 Description: Russian billionaire Nikolai Shostakovitch makes an offer to the former crew of the spaceship ILSE. He will finance a return voyage to the icy moon Enceladus. The offer is too good to refuse—the expedition would give them the unique opportunity to recover the body of their doctor, Dimitri Marchenko.

Everyone on board knows that their benefactor acts out of purely personal motivations… but the true interests of the tycoon and the dangers that he conjures up are beyond anyone’s imagination.

Bonus: A Guided Tour of the Asteroids – what science knows about the asteroid belt. 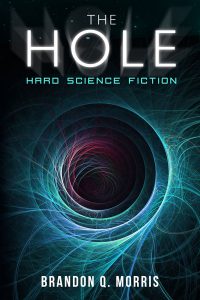 Description: A mysterious object threatens to destroy our solar system. The survival of humankind is at risk, but nobody takes the warning of young astrophysicist Maribel Pedreira seriously. At the same time, an exiled crew of outcasts mines for rare minerals on a lone asteroid.

When other scientists finally acknowledge Pedreira’s alarming discovery, it becomes clear that these outcasts are the only ones who may be able to save our world, knowing that THE HOLE hurtles inexorably toward the sun.

Bonus: A Guided Tour of Black Holes – what science knows about this amazing phenomenon. 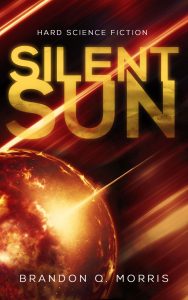 Description: Is our sun behaving differently from other stars? When an amateur astronomer discovers something strange on telescopic solar pictures, an explanation must be found. Is it merely artefact? Or has he found something totally unexpected? An expert international crew is hastily assembled, a spaceship is speedily repurposed, and the foursome is sent on the ride of their lives. What challenges will they face on this spur-of-the-moment mission to our central star?

What awaits all of them is critical, not only for understanding the past, but even more so for the future of life on Earth.

Bonus: A Guided Tour of the Sun – what science knows about our central star. 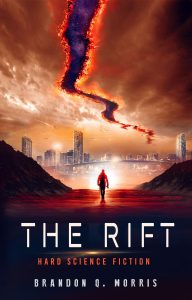 Description: There is a huge, bold black streak in the sky. Branches appear out of nowhere over North America, Southern Europe, and Central Africa. People who live beneath The Rift can see it. But scientists worldwide are distressed—their equipment cannot pick up any type of signal from it. The rift appears to consist of nothing. Literally. Nothing. Nada. Niente. Most people are curious but not overly concerned. The phenomenon seems to pose no danger. It is just there.

Then something jolts the most hardened naysayers, and surpasses the worst nightmares of the world’s greatest scientists—and rocks their understanding of the universe. 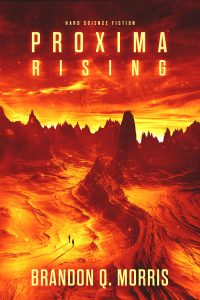 Description: Late in the 21st century, Earth receives what looks like an urgent plea for help from planet Proxima Centauri b in the closest star system to the Sun. Astrophysicists suspect a massive solar flare is about to destroy this heretofore-unknown civilization. Earth’s space programs are unequipped to help, but an unscrupulous Russian billionaire launches a secret and highly-specialized spaceship to Proxima b, over four light-years away. The unusual crew faces a Herculean task—should they survive the journey. No one knows what to expect from this alien planet. 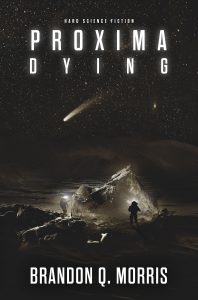 Description: An intelligent robot and two young people explore Proxima Centauri b, the planet orbiting our nearest star, Proxima Centauri. Their ideas about the mission quickly prove grossly naive as they venture about on this planet of extremes. Where are the senders of the call for help that lured them here? They find no one and no traces on the daylight side, so they place their hopes upon an expedition into the eternal ice on Proxima b’s dark side. They not only face everlasting night, the team encounters grave dangers. A fateful decision will change the planet forever.

Bonus in Book Two of the Proxima Trilogy—The Guided Tour of Dark Matter: What science knows about this strange phenomenon that dominates the mass of the universe. 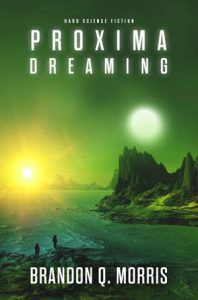 Description: Alone and desperate, Eve sits in the control center of an alien structure. She has lost the other members of the team sent to explore exoplanet Proxima Centauri b. By mistake she has triggered a disastrous process that threatens to obliterate the planet. Just as Eve fears her best option may be a quick death, a nearby alien life form awakens from a very long sleep. It has only one task: to find and neutralize the destructive intruder from a faraway place.

Third installment of the Proxima Trilogy. Hard Science Fiction—based on the current state of science. Bonus: The Guided Tour to Alien Life. Are we alone in the universe? What does astrobiology know about this? 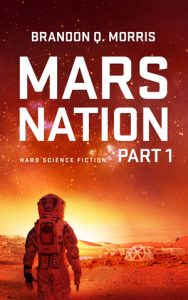 Description: NASA finally made it. The very first human has just set foot on the surface of our neighbor planet. This is the start of a long research expedition that sent four scientists into space. 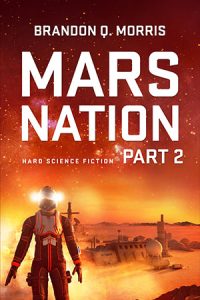 Description: A woman presumed dead fights her way through the hostile deserts of Mars. With her help, the NASA astronauts orphaned on the Red Planet hope to be able to solve their very worst problem. But their hopes are shattered when an unexpected menace arises and threatens to destroy everything the remnant of humanity has built on the planet. They need a miracle—or a ghost from the past whose true intentions are unknown.

Mars Nation 2 continues the story of the last representatives of Earth, who have found asylum on our neighboring planet, hoping to build a future in this alien world. 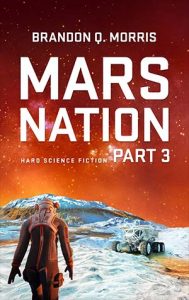 Description: Does the secret of Mars lurk beneath the surface of its south pole? A lone astronaut searches for clues about the earlier inhabitants of the Red Planet. Meanwhile, Rick Summers, having assumed the office of Mars City’s Administrator by deceit and manipulation, tries to unify the people on Mars with the weapons under his control. Then Summers stumbles upon so powerful an evil that even he has no means to overcome it. 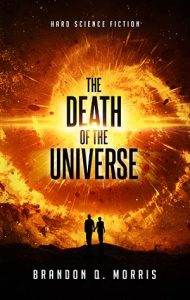 Description: For many billions of years, humans—having conquered the curse of aging—spread throughout the entire Milky Way. They are able to live all their dreams, but to their great disappointment, no other intelligent species has ever been encountered. Now, humanity itself is on the brink of extinction because the universe is dying a protracted yet inevitable death. They have only one hope: The ‘Rescue Project’ was designed to feed the black hole in the center of the galaxy until it becomes a quasar, delivering much-needed energy to humankind during its last breaths. But then something happens that no one ever expected—and humanity is forced to look at itself and its existence in an entirely new way.