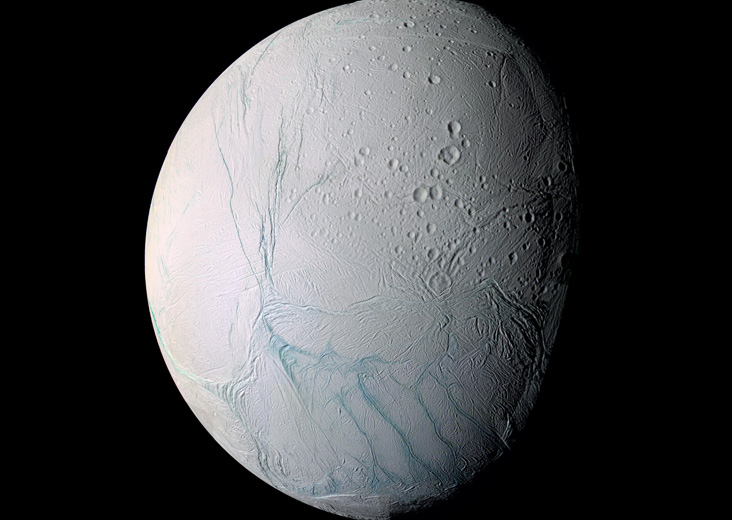 Saturn’s ice moon, Enceladus, is one of the most promising worlds in terms of the search for places where extraterrestrial life might exist. Of course, as a reader of the Ice Moon series, you’ve already known that for a long time. Near its south pole there are deep fissures in its crust, through which water is constantly being forced outward. This allows researchers to look under the ice, which is up to 100 kilometers thick, without having to drill through it. A new study tries to explain the unusual appearance of these sulci, which are also called “tiger stripes.”

“First seen by the Cassini mission, these stripes are like nothing else known in our Solar System,” says Doug Hemingway, primary author of the article in Nature Astronomy. “They are parallel and evenly spaced, about 130 kilometers long and 35 kilometers apart. What makes them especially interesting is that they are continually erupting with water ice, even as we speak. No other icy planets or moons have anything quite like them.”

END_OF_DOCUMENT_TOKEN_TO_BE_REPLACED

The hottest candidates for the development of extraterrestrial life are one of Saturn’s moons, Enceladus, and one of Jupiter’s moons, Europa – even though it’s very cold on its surface. Life, in fact, might be hiding in an underground ocean under the 50-100 kilometer thick layer of ice. Its existence is indicated, among other things, by the countless fault lines criss-crossing across its surface.

Proof of this underground sea, however, has not yet been found. But now, with the help of the Keck Telescope on Mauna Kea (Hawaii), astronomers have found more evidence, as they have written in an article.