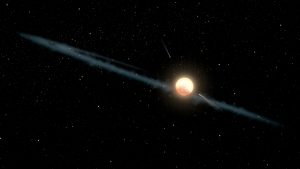 No one has ever ventured deeper into space than the four astronauts of Shepherd-1. The aim of their mission: to witness the creation of the cosmos. Using the sun as a lens, they are to align a flock of probes in such a way that the moment of the Big Bang becomes visible.

For astronomer Christine, this is a dream come true. So she is bitterly disappointed when the first images are obscured by a kind of veil that prevents any insight. She works obsessively to find a solution, but when she finally succeeds in lifting the veil, she sees something that would have better been kept hidden...